Ballet Technique Quiz
Ballet technique is the foundational principles of body movement and form used in ballet. It is an important aspect of ballet performance because ballet (especially classical ballet) puts great emphasis on the method and execution of movement.[1] The techniques found in classical ballet are a framework for many other styles of dance, including jazz and contemporary ballet.

Dance History Quiz
The history of dance is difficult to access because dance does not often leave behind clearly identifiable physical artefacts that last over millennia, such as stone tools, hunting implements or cave paintings. It is not possible to identify with exact precision when dance became part of human culture.

Choreography Quiz
Choreography is the art or practice of designing sequences of movements of physical bodies (or their depictions) in which motion or form or both are specified. Choreography may also refer to the design itself. A choreographer is one who creates choreographies by practicing the art of choreography, a process known as choreographing. Choreography is used in a variety of fields, including ballet, opera, musical theatre, cheerleading, cinematography, gymnastics, fashion shows, ice skating, marching band, show choir, theatre, synchronized swimming, cardistry, video game production, and animated art. In the performing arts, choreography applies to human movement and form. In dance, choreography is also known as dance choreography or dance composition.

Dance- End of Year
dance, the movement of the body in a rhythmic way, usually to music and within a given space, for the purpose of expressing an idea or emotion, releasing energy, or simply taking delight in the movement itself.

Dance Arts and Humanities Quiz
Dance is a performing art form consisting of purposefully selected sequences of human movement. Dance can be categorized and described by its choreography, by its repertoire of movements, or by its historical period or place of origin.

Dance Curriculum Choreography Quiz
Choreography is the art of making dances, the gathering and organization of movement into order and pattern.

Dance History Quiz
The history of dance is difficult to access because dance does not often leave behind clearly identifiable physical artefacts that last over millennia, such as stone tools, hunting implements or cave paintings. It is not possible to identify with exact precision when dance became part of human culture.

Physical Education- Elements of Dance Quiz
Here we detail the five elements that all forms of dance and creative movement have in common: body, action, space, time and energy. Being able to identify and understand these core characteristics can help you when talking about a dance performance or can help you get your own messages across through movement.

Which Enchanted Character AM I?
Enchanted is a 2007 American live-action/animated musical fantasy romantic comedy film, produced by Walt Disney Pictures, Sonnenfeld Productions, and Josephson Entertainment. Written by Bill Kelly and directed by Kevin Lima, the film stars Amy Adams, Patrick Dempsey, James Marsden, Timothy Spall, Idina Menzel, Rachel Covey, and Susan Sarandon. The film is live action/animated and its plot focuses on an archetypal Disney Princess, who is forced from her traditional animated world into the live-action world of New York City. The film is both a homage to, and a self-parody of, Disney\\\'s animated features, making numerous references to Disney\\\'s past works through the combination of live-action filmmaking, traditional animation, and computer-generated imagery. It marks the return of traditional animation to a Disney feature film after the company\\\'s decision to move entirely to computer animation in 2004. Composer Alan Menken and lyricist Stephen Schwartz, who had written songs for previous Disney films, wrote and produced the songs of Enchanted, with Menken also composing its score. The animated sequences were produced at James Baxter Animation in Pasadena. Filming of the live-action segments took place around New York City. Enchanted premiered on October 20, 2007, at the London Film Festival before its wide release on November 21, 2007, in the United States. Enchanted was critically well-received, established Adams as a leading lady, and earned more than $340 million worldwide at the box office.[3] It won three Saturn Awards, Best Fantasy Film, Best Actress for Adams and Best Music for Menken. Enchanted also received two nominations at the 65th Golden Globe Awards and three Best Original Song nominations at the 80th Academy Awards. A sequel, titled Disenchanted, is in development and is expected to premiere on Disney+.

Which Bridge to Terabithia Character AM I?
Bridge to Terabithia is a 2007 American fantasy drama directed by Gábor Csupó and written by David L. Paterson and Jeff Stockwell. It is based on the 1977 novel of the same name by Katherine Paterson. The film, starring Josh Hutcherson, AnnaSophia Robb, Robert Patrick, Bailee Madison, and Zooey Deschanel, follows two 11-year-old neighbors who create a fantasy world called Terabithia to cope with reality and spend their free time together in an abandoned tree house. The original novel was based on events from the childhood of the author\\\'s son, screenwriter David Paterson. When he asked his mother if he could write a screenplay of the novel, she agreed in part because of his ability as a playwright. Produced by Walden Media and Klasky Csupo, principal photography was shot in Auckland, New Zealand, within 60 days. Film editing took ten weeks, while post-production, music mixing, and visual effects took several months, with the film fully completed by November 2006. This was Michael Chapman\\\'s last film as cinematographer before his retirement and eventual death in 2020. Bridge to Terabithia was theatrically released in the United States on February 16, 2007 by Walt Disney Pictures. The film received positive reviews from critics who praised the visuals, performances and faithfulness to the source material. It was a box-office success, grossing $137.6 million worldwide against its budget of $20–25 million. At the 29th Young Artist Awards, the film won all five awards for which it was nominated.

Which Zodiac Character AM I?
Zodiac is a 2007 American mystery thriller film directed by David Fincher from a screenplay by James Vanderbilt, based on the 1986 non-fiction book of the same title by Robert Graysmith. The film stars Jake Gyllenhaal, Mark Ruffalo, and Robert Downey Jr. with Anthony Edwards, Brian Cox, Elias Koteas, Donal Logue, John Carroll Lynch, Chloë Sevigny, Philip Baker Hall and Dermot Mulroney in supporting roles.[4][5] The film tells the story of the manhunt for the Zodiac Killer, a serial murderer who terrorized the San Francisco Bay Area during the late 1960s and early 1970s, taunting police with letters, bloodstained clothing, and ciphers mailed to newspapers. The case remains one of the United States\\\' most infamous unsolved crimes. Fincher, Vanderbilt, and producer Bradley J. Fischer spent 18 months conducting their own investigation and research into the Zodiac murders. Fincher employed the digital Thomson Viper FilmStream Camera to photograph most of the film, with traditional high-speed film cameras used for slow-motion murder sequences. Zodiac was released by Paramount Pictures in North America and Warner Bros. Pictures in international markets on March 3, 2007, and received mostly positive reviews, with praise for its writing, directing, acting, and historical accuracy. The film was nominated for several awards, including the Saturn Award for Best Action, Adventure or Thriller Film. It grossed over $84.7 million worldwide on a production budget of $65 million. In a 2016 critics\\\' poll conducted by the BBC, Zodiac was voted the 12th greatest film of the 21st century.

Which Bratz Character AM I?
Bratz (also known as Bratz: The Movie) is a 2007 American comedy film based on the Bratz line of dolls. The film is directed by Sean McNamara and starring Nathalia Ramos, Skyler Shaye, Logan Browning, and Janel Parrish,[4] the story revolves around the four teenage girls, the origin of their friendship and the social pyramid that tries to make the Bratz conform to archetypal high school cliques. It was released by Lionsgate on August 3, 2007. The film was panned by critics and fans alike and was a box office bomb, only earning half of its $20 million budget in North America, and was runner-up at the 28th Golden Raspberry Awards for worst picture.

Which Hairspray Character Am I?
Hairspray is a 2007 musical romantic comedy film based on the 2002 Broadway musical of the same name, which in turn was based on John Waters\\\'s 1988 comedy film of the same name. Produced by Ingenious Media and Zadan/Meron Productions, and adapted from both Waters\\\'s 1988 script and Thomas Meehan and Mark O\\\'Donnell\\\'s book for the stage musical by screenwriter Leslie Dixon, the film was directed and choreographed by Adam Shankman and has an ensemble cast including John Travolta, Michelle Pfeiffer, Christopher Walken, Amanda Bynes, James Marsden, Queen Latifah, Brittany Snow, Zac Efron, Elijah Kelley, Allison Janney, and Nikki Blonsky in her feature film debut. Set in 1962 Baltimore, Maryland, the film follows the &amp;quot;pleasantly plump&amp;quot; teenager Tracy Turnblad (Blonsky) as she pursues stardom as a dancer on a local television dance show and rallies against racial segregation. 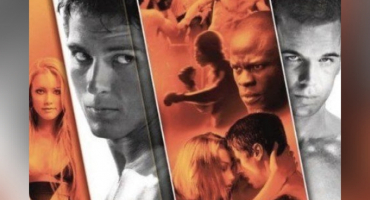 Which Never Back Down Character Am I?
Never Back Down is a 2008 American martial arts film directed by Jeff Wadlow and starring Sean Faris, Amber Heard, Cam Gigandet, and Djimon Hounsou. It tells the story a frustrated and conflicted teenager who arrives at a new high school and discovers an underground fight club there. The film was theatrically released on March 14, 2008. It received generally negative reviews from critics and grossed $41.6 million worldwide against a budget of $20 million.
1
...
36
Next ❯